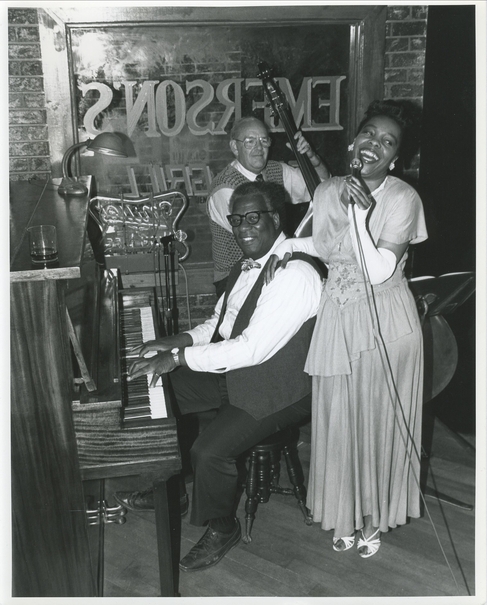 Two of the four degrees Jacque Tara Washington holds are a Bachelor of Fine Arts in Visual and Performing Arts from Syracuse University and in Radio & Television Communications and Journalism from Onondaga Community College. Jacque is a member of Actors’ Equity Association and Screen Actors Guild-American Federation of Television and Radio Artists.

Jacque originated the role of Sydney Sorrell, wife of one of the Black soldiers from upstate New York, who enlisted in the United States Colored Troops and fought in the American Civil war, in the feature film Civil Warriors produced by Photosynthesis Productions. The documentary won an Accolade Competition Award of Merit from IMDb and the Long Beach Indie International Film Festival Award. Jacque also originated the role of legendary left-handed guitarist Elizabeth “Libba” Cotton in Here This Day for the Society for New Music.

Other portrayals include Billie Holiday in the musical/drama on the life and music of the legendary jazz vocalist in Lady Day at Emerson’s Bar & Grill, and Berenice in The Member of the Wedding, both which she performed for several theatre companies; Mama Euralie in Once on This Island for Hangar Theatre; a runaway slave in Big River for Syracuse Stage; Woman of Catfish Row/Peter’s wife in Porgy and Bess for the Syracuse, Greater Buffalo and Connecticut Opera Companies; Little Buttercup in H.M.S. Pinafore for Syracuse Opera Company, and Doris in The Owl and the Pussycat for several theatre companies. Additionally, Jacque worked under Spike Lee’s direction in the feature film Malcolm X. Jacque has performed in many industrial films.

Jacque won rave reviews for her self-penned one-woman musical/drama Billie’s Diary, based on Holiday’s life and music. The Herald/Post Standard chose Jacque’s play and performance among the best of the year. Other self-penned performances include Trav’in: A Musical Journey in Blues and Jazz and Yes, No, Maybe So, a seven-character musical/comedy/drama designed for elementary and middle school-aged children. Jacque’s extensive work with elementary school students includes a project with 5th and 6th grade students and teachers at Ft. Stanwix Elementary School in Rome, New York in which she wrote, directed and performed in World War Two USO Show. Jacque directed Ntozake Shange’s for colored girls who considered suicide/when the rainbow is enuf at Hamilton College and lectured on that play at Albany State University. She taught acting at Hamilton College (adjunct). Jacque served as a Teaching Artist in aesthetic education for various school districts and higher education institutions in the upstate New York area and in Philadelphia, PA.

Jacque conceived, directed, and performed in The Things We Do, an interactive DVD and live presentational tribute to social workers, for the Syracuse University (SU) School of Social Work’s 50th anniversary celebration. Jacque is also an associate producer and one of six featured social workers in the SU School of Social Work DVD, Working for Social Justice: The Ethics and Core Values of Social Work, designed to recruit potential students to the program. Jacque wrote and produced a series of radio programs for public radio entitled, Voices: The Music and Politics of African American Vocalists. She wrote the theme song for a weekly woman’s radio news show, Women’s Voices, and produced a monthly segment for that show entitled, Speaking Script, which focused on female playwrights and their works. Jacque has also worked as a radio broadcaster and talk show host.

Jacque developed and facilitated workshops on anti-racism, networking, cultural adaptability, professionalism, and emotional intelligence for Ithaca College, Cornell University, Tompkins Cortland Community College, Lockheed Martin, and various other agencies and corporations throughout America; as well as an interactive family workshop that engages family systems to explore cultural heritage and create quilt patches and stories to share with other families and communities. Jacque served as Assistant Director and actress with the Cornell University Interactive Theatre Ensemble (CITE) and presented workshops on diversity and policy at universities and corporations throughout America. Jacque has also appeared in diversity and suicide prevention training digital data formats for Cornell University.

« Back to my Actress Page