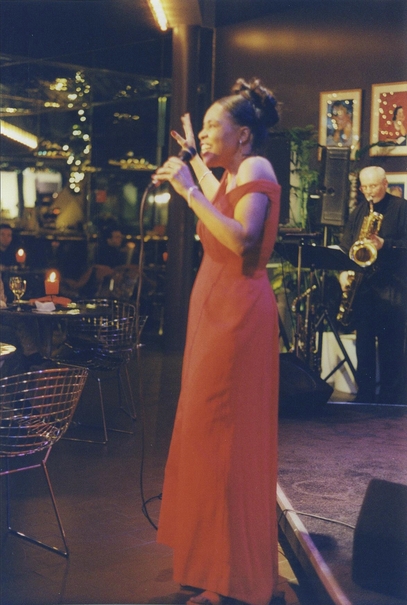 Jacque Tara Washington is the executive producer of her two independently produced CDs, World of Passion and Jazz Passions. Jacque performed in Matsumoto, Japan for 3 months and was invited back a year later as the featured jazz vocalist for the grand opening of the Tokyo Dome Hotel in Tokyo, Japan and performed in Tokyo for 3 months. She was a featured jazz vocalist at the Portman-Ritz Carlton Hotel in Shanghai, China. Jacque performed in Martinique, the French West Indies for a tribute concert to the late trumpeter Don Cherry, and in London, England at the Palookaville Jazz Club. Jacque also appeared regularly on Black Entertainment Television’s Jazz Discoveries. Jacque continues to perform throughout the United States.

Jacque originated the role of legendary left-handed guitarist Elizabeth “Libba” Cotton in Here This Day for the Society for New Music, and originated the role of Sydney Sorrell, wife of one of the Black soldiers from upstate New York, who enlisted in the United States Colored Troops and fought in the American Civil war, in Civil Warriors produced by Photosynthesis Productions.

Other portrayals include Billie Holiday in the musical/drama on the life and music of the legendary jazz vocalist in Lady Day at Emerson’s Bar & Grill, and Berenice in The Member of the Wedding, both which she performed for several theatre companies; Mama Euralie in Once on This Island, for Hangar Theatre; and a runaway slave in Big River for Syracuse Stage.

Jacque won rave reviews for her self-penned one-woman musical/drama, Billie’s Diary, based on Holiday’s life and music. The Herald/Post Standard chose Jacque’s play and performance among the best of the year. Other self-penned performances include Trav’in: A Musical Journey in Blues and Jazz and Yes, No, Maybe So, a seven-character musical/comedy/drama designed for elementary and middle school-aged children. Jacque wrote and produced a series of radio programs for public radio entitled, Voices: The Music and Politics of African American Vocalists. She wrote the theme song for a weekly woman’s radio news show, Women’s Voices, and produced a monthly segment for that show entitled, Speaking Script, which focused on female playwrights and their works. Jacque has also worked as a radio broadcaster and talk show host.

Jacque is the recipient of the Jazz Vocalist of the Year Award from the Syracuse Area Music Awards Association, and her voice can be heard on national and regional jingles. Two of the four degrees Jacque holds are a Bachelor of Fine Arts in Visual and Performing Arts from Syracuse University and a degree in Radio & Television Communications and Journalism from Onondaga Community College. Jacque is a member of Actors’ Equity Association and Screen Actors Guild-American Federation of Television and Radio Artists.

« Back to my Vocalist Page